The music, suitably ominous, increased slowly into audibility as Chris Bath (Channel 7’s ‘Sunday Night’) introduced the story that they have been flogging on the ‘Today Tonight’ program.  Basically reiterating that they’ve been on this Lyme Disease issue for several weeks now and if you want the proof, then here it is!  Despite the public health and medical denials – the ultimate evidence!  Two people (plus flashbacks from previous programs) who’ll provide you with conclusive evidence that they have LYME DISEASE.  And IT’S REAL, and, IT’S IN AUSTRALIA.  AND IT’S GOING TO GET YOU! 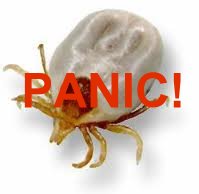 So we get some hearsay from a female National Parks worker who has non-specific symptoms, has been bitten by lots of ticks, and therefore it has to be Lyme Disease.  Proof positive!.  And a gentleman who’s suffering lots of excruciating pain, has never been out of the country (gosh he doesn’t even have a passport) has been to lots of doctors and finally two of them have diagnosed Lyme Disease.  If that doesn’t convince then nothing will!

Maybe one is expected to switch off during these programs reaching a state of surfeited satiation in the stupidity index and not illuminating one’s little critical analysis neurons.  But even the most disconnected, prior to becoming cross and indignant at those ‘bloody denialist, bloody public servants – something needs to be done about them – bloody ratbags, etc, etc!’ must surely ask the most basic of questions: ‘OK, show me some evidence’.

But nothing, zilch, nada – not even one of the confirmatory doctors saying that they’d done this test, and that test and the evidence suggests that the patient had symptoms consistent with a Lyme type disease.  The male patient wasn’t even asked if he had ever been bitten by a tick (or ticks)!  Now I know that it doesn’t provide a definitive answer (he might not know that he was bitten), but they could have asked!

So here are a few factoids

Lyme Disease (aka Lyme Borreliosis) is a disease caused by at least three bacterial species Borrelia burgdorferi (in the USA) and B. afzeli and B.garinii (European cases).  It’s a common tick borne disease in the Northern hemisphere, generally carried by the Ixoides spps (the hard ticks).  Ticks can also transmit other parasites that cause Babesiosis and Human Granulocytic Anaplasmosis

In most cases (especially if treated early) infection is cured by antibiotics.  Treatment delay can lead to a more serious and difficult to treat disease.

The presence of Lyme Disease (or a Lyme Like Disease) in Australia has been controversial but recent evidence suggests that it may very well be present here.  A recent paper by PJ Mayne entitled ‘Emerging incidence of Lyme borreliosis, babeosis, bartonellosis and granulolcytic erlichiosis in Australia’ (International Journal of General Medicine 2011: 4, 845-852) forms the following conclusion:  ‘The study identified a much larger tick-borne disease (TBD) burden within the Australian community than hitherto reported.  In particular, the first cases of endemic human Babesia and Bartonella disease in Australia with coexisting Borrelia infection are described, thus defining current hidden and unrecognized components of TBD and demonstrating local acquisition in patients who have never been abroad.’

So there we go!  Now for some hypothesising.  Do we have ticks in Australia? – Yes.  Are ticks globally known to transmit diseases when they bite other animals? – Yes.  Is it likely then that Australian ticks (forgive the insult to the Oz ticks) are also likely to be bloodsucking little parasite transferrers? – Yes.  Is it a reasonable proposition then to assume that the Oz tick is just as likely to transmit parasitic disease as does its transcontinental cousins?  Given the FACTUAL evidence, and not a load of histrionic garbage, I’d suggest the answer is (with a high degree of probability), YES.

It took around and hour or so to dig around and get the relevant information related to Lyme Disease.  It would have been much more illuminating and informative to the general public if the people at Channel 7’s ‘Sunday Night’ and ‘Today Tonight’ had taken the trouble to do the same – and presented a well research piece of reporting rather than just another scare-mongering stunt.

And that’s my Rant for today!

Australian born and bred who has spent most of his working life in R&D and IP management with earlier forays in the newspaper industry and martial arts. Fortunate enough to be living in one of the best countries in the World, even though I might get grumpy with it from time to time.
View all posts by deknarf →
This entry was posted in Uncategorized and tagged Australia, Babesiosis, Borrelia burgdorferi, Channel 7, Chris Bath, Lyme Disease, Sunday Night, Symptom, Tick-borne disease, Today Tonight, United States. Bookmark the permalink.
Ærchies Archive - Digital Detritus