In keeping with the last Graphical Manipulation I’m endeavouring to maintain the bipartisanship in my efforts to ‘Maintain the Ridicule’ related to those who wish to rule over us!  Admittedly it‘s also driven by the continuing paucity of silly Phoney Tony stunts.  These 30 second grabs where Tony Abbott makes some devastatingly enlightening carefully pre-prepared comment and then dashes off before he can be questioned is becoming concerning.  Anyone would think that he was trying to create a new persona and avoid any serious debate.  That couldn’t be right, could it?

So in a week that’s seen the NO Coalition and Labor fighting over who owns Western Sydney, that now reputed ‘heartland’ of the NO Coalition, spare a thought for our very first parliamentary practiser of fruit loopery!  Our very own, Bob Katter!  Bob’s finally realised that if you want to start a party that’s out on the fringe, there are lots of fringe dwellers who are a lot fringier than Bob, and they want to get in on the action!  So there’s this; 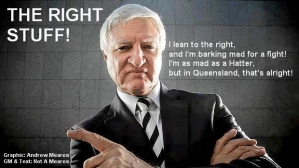 Watching Christine Milne continue to explain why The Australian Greens had split from Labor without becoming any the wiser was one of the more pointless dalliances during the week.  And then Bob Brown trying to justify the unjustifiable behaviour of the Sea Shepherd pirates in putting lives at risk in some of the most dangerous ocean known to man, left me marvelling at people’s capacity for self-righteous self denial.  Sorry Bob, I don’t believe in whaling but believe, even more so, that deliberately banging ships into one another in the high seas is not going to make a difference.  The game changer will be done in the streets of Japan!  Anyhow considering these two, set me wondering about fancifulness and misfit pairs and ‘Mills & Boone’ strangely came to mind.  The result being this; 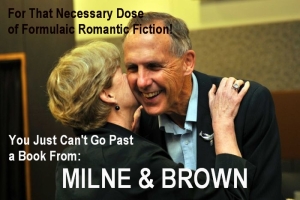 Just because Phoney Tony Abbott is off hiding doesn’t mean that there isn’t a store of pictures on the internet that can be accessed in times of frantic need.  The lack of appearances also reminded me of Julie Bishop who is also very much in hiding, which reminded me of Death Stares and, well, this occurred: 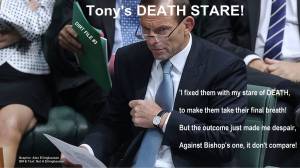 Being a lover of words, especially if they are neatly put in the right order, made me consider that there are occasions when, even the extensive vocabulary of the English language seems to lack just the right word.  This was one of them!  Describing what this graphic might represent.  Misogynist?  Yep, but Nope.  Trogdolyte?  Hmm, descriptively applicable!  Liar?  That too!  But not quite the epitomising descriptor.  So it ended up like this; 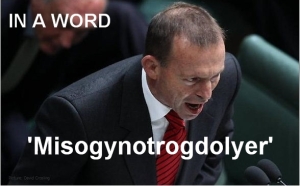 Australian born and bred who has spent most of his working life in R&D and IP management with earlier forays in the newspaper industry and martial arts. Fortunate enough to be living in one of the best countries in the World, even though I might get grumpy with it from time to time.
View all posts by deknarf →
This entry was posted in Uncategorized and tagged Australia, australian politicians, Australian politics, Bob Brown, Bob Katter, Christine Milne, current-events, graphical manipulations, Julie Bishop, politics, Tony Abbott. Bookmark the permalink.