Graphical Manipulations #39: Meja, Ejakashun, Drones, The Rat And That PC!

Thought it might be wise to maintain a higher moral tone in the Graphical Manipulations scene this time and not descend into the cesspit of menu’s of misogyny, the grubbiness of the warped and twisted minds of the Sattler shock jocks, and the pretentious whining of the sewer mining mainstream media Ackerman’s (and his ilk) and their paltry attempts to defend the indefensible and their infinite capability to believe that degradation and insult directed at Australia’s Prime Minister is de riguer!  Remind me to pop around and make disgusting suggestions and tell puerile 10 year old smutty jokes to your wives sometime! I’m sure that they’ll just laugh and laugh!!

When such behaviour reaches the international media, which it now has, you know that a nasty, self-serving, whatever it takes NO Coalition and its leader Phoney Tony Abbott, with complicit support of the msm mentioned above have finally drawn the attention of the rest of the world to the awful truth that there is in this country, the most disgusting bunch of low lifes who, under a veneer of respectability, dribble out the filth of their minds and tout it for all to see under the pretence that it’s funny.  Bear in mind that you can always tell the character of a person by the friendships they keep.  And inspection of your friends says a lot about you – and it is not a pleasant, nor pretty sight!

You could say that I’m somewhat ANGRY and DISGUSTED by the behaviour of the NO Coalition and Australia’s msm!

So first to the msm, as its own Australian Communications and Media authority recognises the declining media standards (vulgar, inaccurate and indecent).  Such thoughts and those imagining the msm disappearing into the sewer of their own making soonest, and its inability to lift its mind above the gutter to ask the real questions led to this;

Which naturally led to thoughts about the NO Coalition, with whom my anger and disgust rises higher and higher each day.  Their commitment to the Gonski education reforms brought light unto the darkness by way of this; 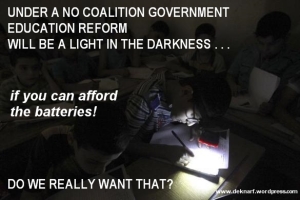 Contemplation of the exquisiteness of the production of the ‘Game of Thrones’ and it’s Machiavellian approach to the acquisition and maintenance of a hold on power, juxtaposed to the ceaseless lies, innuendo and whining about the current government by the NO Coalition gave rise to; 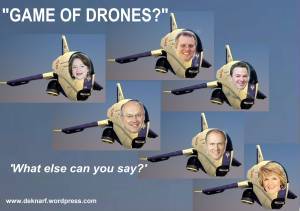 And then the rat returned, bringing a lighter mood to the proceedings with his humorous take on the nature of man and his ability to keep a straight face whilst telling untruths (well lies really); 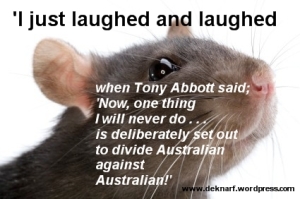 When flattering a group whose view of freedom relates primarily to a self-serving, conservative, free-marketeering, slave based economy with just a smidge of carpet-bagging;

And then to the true horrors of genetic manipulation to build the master race; 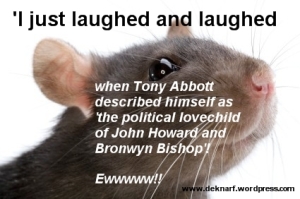 And then, finally to the product of such a union;

Australian born and bred who has spent most of his working life in R&D and IP management with earlier forays in the newspaper industry and martial arts. Fortunate enough to be living in one of the best countries in the World, even though I might get grumpy with it from time to time.
View all posts by deknarf →
This entry was posted in Uncategorized and tagged Australia, Australian Labor Party, australian politicians, Australian politics, Coalition, current-events, graphical manipulation, graphical manipulations, NO Coalition, Phoney Tony Abbott, politicians, politics, Prime Minister of Australia, satire, Tony Abbott. Bookmark the permalink.

6 Responses to Graphical Manipulations #39: Meja, Ejakashun, Drones, The Rat And That PC!