Some days are just, well, annoying! You find some interesting graphics, you manipulate to convey your particular kant (or is that rant?).  And then, along comes all this interesting stuff in the latter days of the week which gives you a whole heap more of GM’s that you’re busting to use, and yet you’ve got all the others that you’ve already done, and your policy is that it’ll only be eight (or maybe nine) to keep it short, and the Rat has come up with a whole heap more, and you’d really love to do one on the Carbon Dioxide quote, and you’ve got the graphic for it, and . . . . . and! Oh well there’s always next week!  And as the NO Coalition starts to worry about the polls, it just gets more frenetic, doesn’t it?  ‘A wealth of graphics and mangled verbiage that hath such potential in them!’  Apologies Aldous.

So first to mind was the huffawing from the NO Coalition about the Ruddstoration and the loss of all this front bench talent, yada, yada, and it bought to mind what might be the talent in the Opposition and the realisation that most of their shadow front bench were leftovers from the Howard debacle.  You remember him surely?  Yep, John Howard the one who was so convinced of his own importance and that Australia couldn’t do without him, that he was, well, Rudded you might say!  And that thought led to this;

And a rather uncomfortable graphic from the Pamploma Running of the Bulls, lead to thoughts of bullsh*t, and to the feeding of it to the Australian population by you know who, and that led to this;

Midweek we saw Scott Morrison get all ansty pantsy over those pesky boat people and that drew attention to slogans, and the making thereof, leading to; 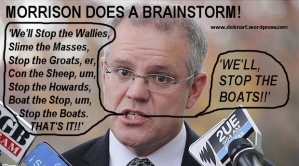 And of course his views about sending our most skilled and experienced top line fighting men in to stop said pesky boat people making self harm threats produced this; 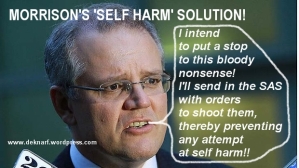 Talk about using an elephant gun to kill a mouse!  Who said that the man didn’t have a sense of humourless, self important, faux indignation?

My favourite Rattus rattus made a quick visit with his usual deep and probing insight, but left all grumpy because he only got one go at light hearted banter; 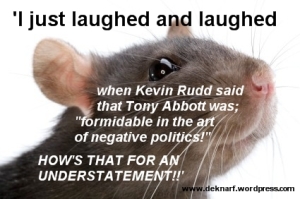 And the ever opportunistic Phoney Tony Abbott, ever the stunt tart, went to visit a pie shop so that he could demonstrate his skills in pushing around pie carts, provided the media (and me) with a very nice graphic, with a very appropriate slogan (there they go again), and that turned to; 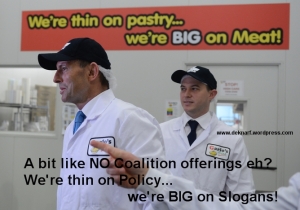 And then it turned out that our hero had had to pay back some $9,000 in falsely (used advisedly) claimed travel expenditure, and unlike Peter Slipper he was given the opportunity to repay it.  Funny that!  Thoughts of that, and Bill Clinton for some reason, and Tony’s response to a female journalist’s persistent questioning on the matter led to;

And then, by accident, a graphic appeared out of the ether courtesy of the ‘Copy’ tag which said it all, and reminded me of the terminology (albeit slightly modified) of Australia’s mighty Ming (aka Sir Robert Menzies) when he perceived the Queen, oh such a long time ago!  The juxtaposition of the reflections of Tony and Mings comment led to;

And all of the previous thoughts and contemplations led ultimately to this;

Australian born and bred who has spent most of his working life in R&D and IP management with earlier forays in the newspaper industry and martial arts. Fortunate enough to be living in one of the best countries in the World, even though I might get grumpy with it from time to time.
View all posts by deknarf →
This entry was posted in Uncategorized and tagged Australia, australian politicians, Australian politics, Bill Clinton, current-events, elephant gun, graphical manipulations, Humour, John Howard, NO Coalition, Peter Slipper, Robert Menzies, satire, Scott Morrison, Tony Abbott. Bookmark the permalink.