Has it been only one week of electioneering?  Or has time warped into a slo-mo crawl of excruciating political garbage spruiked by excruciatingly rancid and boring politicians all THREE WORD SLOGANNING and endeavouring to tell a bigger lie than their counterparts on the other side of the political fence.  All of this subsequently then picked over like a rotting sheep cadaver by the mainstream media vultures, screaming and scrawping over their feotid little gobbets of suppurating sensationalism!  Urggggghhhhh!  And, there’s four more weeks of this!  No wonder I’ve taken to relying on my industrial deafness (thoughtfully provided by a newspaper composing room many years agone) and looking at the Twitterverse to block out most of the visual electoral sordidness!  Which introduction naturally leads into where I wanted to go!

Not averse to the occasional tweet or twenty, and following a visit to the local supermarket I delivered this little missive into the ether;  “Unbelievably delighted to see circa 300 unsold Murdoch Sunday Telegraph’s at Woolworths around noon!  About 10 Heralds left! YAY PEOPLE POWER!”  The Tweet gathered a large number of favourites and retweets and some pretty disparaging comments related to Murdoch and his newspapers and what could be done to combat such obvious bias in his media.  Boycotts etc were actively canvassed, especially given reports of restaurants banning some of his papers.  Questions about what Murdoch owned were raised and in that matter Wikipedia was ever helpful http://en.wikipedia.org/wiki/List_of_assets_owned_by_News_Corp.  The tweet found its way on to a Woolies Tweet posting thingy and its way to the attention of a Sunday Telegraph editor who made some comments.

Subsequently, an enquiry from a Tweeter who, looking for the tweet and the responses, reported that, when looking for it, this (below) was delivered back from Twitter to his search;

Subsequent enquiries/accusations with/at others by myself on Twitter and subsequent ‘who me?’ and denials and, ‘WA LAH!’ the apparently unavailable and unretweetable was once again available and retweetable.  Being a tyro at things PC and Tweetytech all that I can say is Hmmmm?  Uh huh!  And I continue my search for and explanation/clarification.  I leave any views/opinions that you may form, entirely to your febrile minds, and just say that; ‘it would seem that nothing is safe (not even opinion) in the Twitterverse!  Hmmmmm!

And that drew this suspicious mind then to what might happen in a Oziverse ostensibly ruled over by Tony Abbott and his bunch of Howard leftovers – the NO Coalition?  And that gave rise to this;

And that bought forth the spectre of the rumours about Rupert Murdoch’s apparent influence over the NO Coalition and his reported anathema to the National Broadband Network due to, apparently, the competition it might bring to his interests, and the opening up of Australia to other media content and business opportunities.  Such thoughts gave rise to this;

And, if, such imaginings were true, and not the ramblings of poor, deluded, conspiracy theorists, to this;

Being told what to believe, and when, led to thinking about facts and again Joe Hockey’s name rose into the forebrain based on his notorious numerical prestidigitations and his secondary (but rarely fatal) problem with facts.  PolitiFact was thoughtful enough to provide the graphic, and well, this happened;

Needless to say, once we got on to Joe Hockey, that Wascally Widdle Wat, enveigled his way into the conversation with his Wild Widdle Witticisms and;

Of course he had a bit of a snigger at Tony with;

Proceeding to further rub it in with what he considers to be the gut wrencher that’ll make you poo your pants laughing; 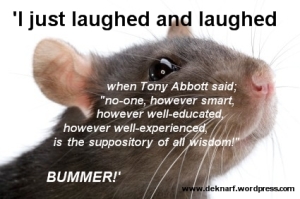 For some reason that last one gave rise to thoughts of embarrassing moments and also to (for some unknown reason) Twitter followers and the getting thereof.  Such thoughts led to this;

And then of course we come to ‘baby kissing’!  Why politicians fail to heed the ‘don’t do anything with animals or children’ mantra is beyond me, and at the same time provides graphical grist to the manipulator’s mill!  Go baby; 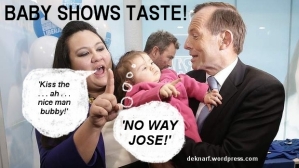 And then the classic of the misaligned kiss, photo opportunities, zombies, insanity and ever present photographers came together as film noir; 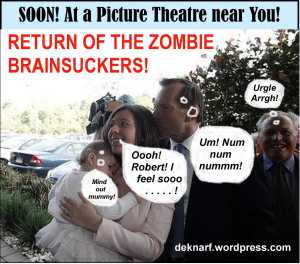 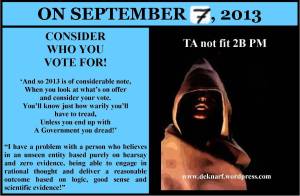 Australian born and bred who has spent most of his working life in R&D and IP management with earlier forays in the newspaper industry and martial arts. Fortunate enough to be living in one of the best countries in the World, even though I might get grumpy with it from time to time.
View all posts by deknarf →
This entry was posted in Uncategorized and tagged Australian politics, Coalition, current-events, graphical manipulations, Humour, Joe Hockey, national broadband network, rupert murdoch, satire, Tony Abbott, Twitter, Wikipedia, Woolworths. Bookmark the permalink.