Not much to say really, as things continue pretty much as they did when this bunch took over the government benches.  The Prime Embarrassment continues to act like a prat, the government tries to sell the unsellable to a voting public who ain’t happy with either the budget, or the government, and the weather continues to defy the sun being largely in the Northern Hemisphere.

So we’ll just let the Graphical Manipulations speak for themselves – with the occasional aside!

There’s the bright new future for all those parasites loafing on the dole because they can’t get a job;

Our three clowns continue to ensure that Parliament continues to be considered a farce by most of the country; 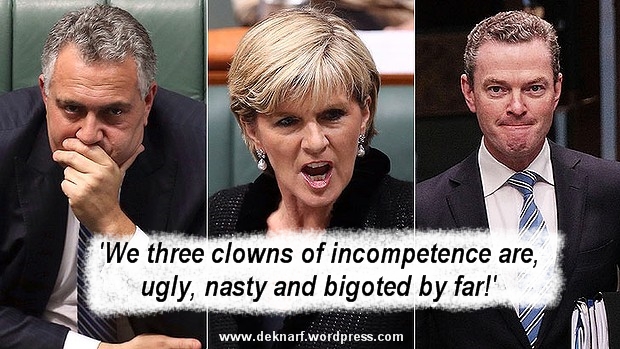 The Prime Embarrassments informs us that bribing asylum seekers is de riguer;

And also admits what most of the Australian public already know;

The bloody Rat returns with his view on bribing asylum seekers; 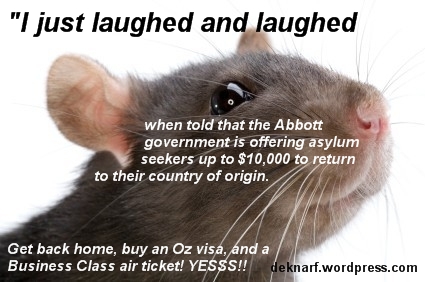 On the fact that retiring Liberals, having attained their lifelong sinecures, are more than prepared to display their personal views of the government;

That he is mightily pleased that Julie Bishop is brimming with exuberance vis a vis the United States;

And that at least someone is willing to call it as it is (even if they are a foreigner) and draw attention to the overwhelming embarrassment felt by Australia’s voters; 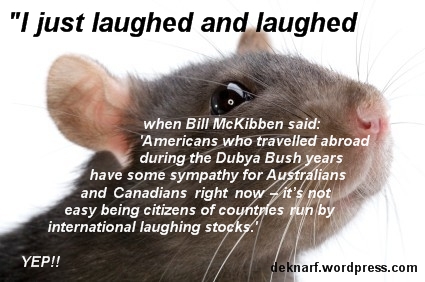 And as we’ve heard so much about statistics vital for the health of our impending emergency, this statistics appears to be fairly vital to the understanding of such matters;

But overall, we know that our government is doing its very best for all of us;

Australian born and bred who has spent most of his working life in R&D and IP management with earlier forays in the newspaper industry and martial arts. Fortunate enough to be living in one of the best countries in the World, even though I might get grumpy with it from time to time.
View all posts by deknarf →
This entry was posted in Uncategorized and tagged asylum seekers, Australia, australian politicians, Australian politics, Christopher Pyne, Coalition government, current-events, government, graphical manipulations, Joe Hockey, Julie Bishop, NO Coalition, politics, Prime Embarrassment, Tony Abbott. Bookmark the permalink.