Graphical Manipulations #155: Some Rats, A Seal, And A Political Meal!

Well! Well! It would seem that the Australian political drama appears set to continue, providing ample opportunity for the Graphical Manipulator to do his thing. The Rabbott, deposed, demoted, demonised and denigrated is certainly showing signs that his debasement has not discouraged his demonic demeanour and plans are afoot to make the Turnbull Prime Ministership a debauchery of dystopic proportion. Ooooh! Goody!!

The Rabbott was not the only one going quietly with Eric Abetz claiming that what with Rabbott and himself gone, along with Kevin Andrews, the tsunami of Lieberal party resignations was upon the face of the firmaments. As with his ability such premonition was, sadly for Eric, illusory!

Julie Bishop cheesed off the Labor party by inviting her boyfriend along to the UN General Assembly. He did, however, seem somewhat disinterested in the proceedings. I once remember doing a similar thing sitting through interminable ballet rehearsals in the flush of lurve! The repetition of the same music, over and over and over and over – has etched that tune firmly in my brain! I would hope that the UN sessions are somewhat more illuminating and less impressionable! 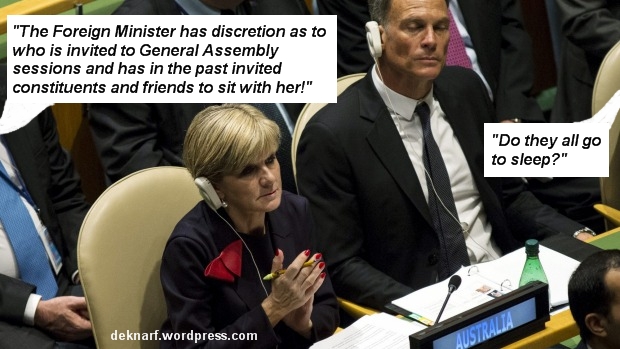 Rat was most impressed with the naivety of all and sundry who considered that the reduction of concessional tax arrangement for the rich was an achievable objective. Ha ha!! 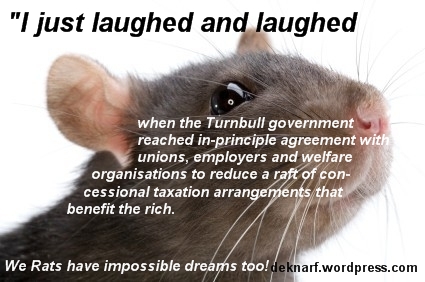 Rat was also impressed with our new Treasurer Scotty (Stop The Boats) Morrison and his first outings in this new consultative and considerate government. Seems to gone over Scotty’s head though!

And he was not only pre-emptive in his opinions about honest conversation but also had a go at a slogan. Bit long though we thought. 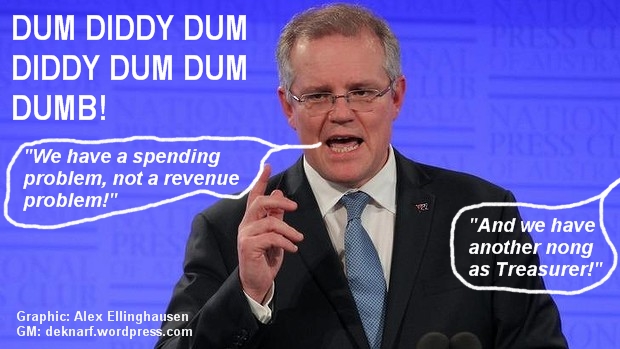 However, he did manage to get back on message with another slogan which ticked all the boxes – catchy, nonsensical, and consisting of THREE WORDS ONLY! Well done Scotty!

Our Erudite Rat felt, after much thought, considered that Madam Kiang Kai-Shek had some appropriate comments for our new Prime Minister. 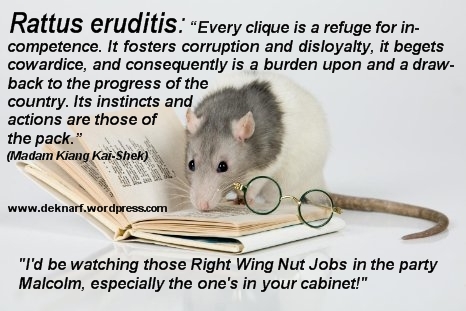 Our friendly, fish-breath, seal turned up again to opine on his fixation – penguins. Very single minded our seal.

And finally, a word from our sponsor – Monsieur le Cynique!

Australian born and bred who has spent most of his working life in R&D and IP management with earlier forays in the newspaper industry and martial arts. Fortunate enough to be living in one of the best countries in the World, even though I might get grumpy with it from time to time.
View all posts by deknarf →
This entry was posted in Uncategorized and tagged Australia, australian politicians, Australian politics, Eric Abetz, graphical manipulations, Julie Bishop, Malcolm Turnbull, satire, Scott Morrison, Tony Abbott. Bookmark the permalink.
Ærchies Archive - Digital Detritus