Graphical Manipulations #170: Nomenclature, Rats. And The Rise Of The Toads!

WOW!! That didn’t take long! Less than a week into the 2016 election and the dogs of ugly have been released.  As well as the toads!  Fear, loathing, xenophobia, are now to the fore – bring on the flag waver extremists next as well as a few, possible, maybe, perhaps, well almost, they were standing close by, did look a bit suss, terror suspects!  Ahh Australia!  The land of the fair go, where the fair go just got a solid dose of brutal reality forced down its throat!

Perhaps it’s because the polls showing that the Lieberal poll numbers have fallen and given Labor a fighting chance, coincidentally gave the Lieberals a chance to fight amongst themselves. It’s becoming more obvious by the day that would be PM Malcolm Fraudbull is not in control and the Lieberal Right Wing Nut Jobs with the Wacko Warringah Wabbott in the van very much are.  Warringah you must be so pwoud!

Mind you the Lieberals are still setting their acolytes into key jobs, especially in areas where they want to control the agenda. Bad luck CSIRO!  Australian science just started coughing up blood – terminal disease suspected! 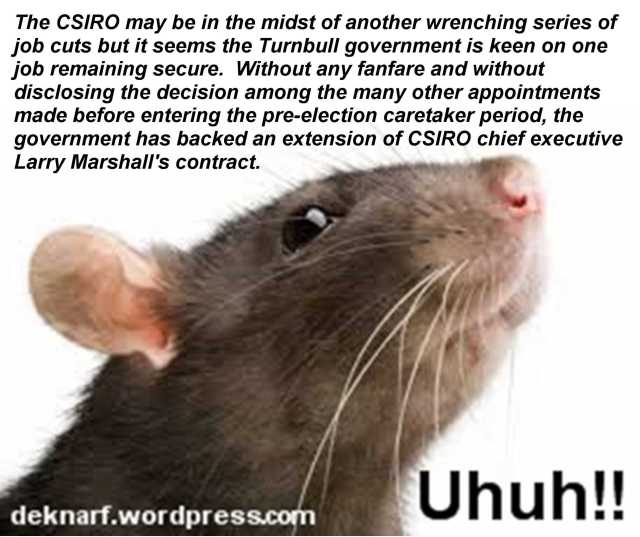 Seeing that name calling seems to be de rigeur at the moment, and not to be left out, we did a bit in order to improve our skills in this vital area of human discourse! 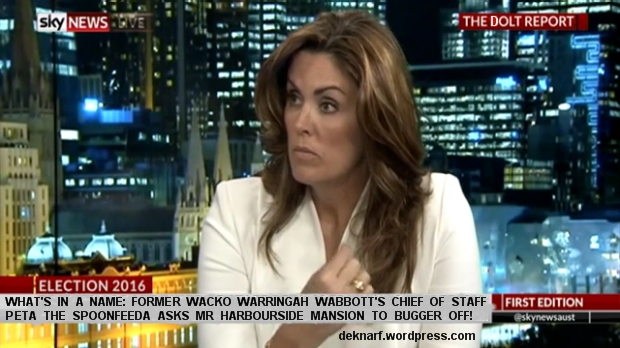 And what could be more opportune than a beautifully timed photo from Andrew Meares which gave insight into what Malcolm “might very well be” compared with Peta Credlin’s view of what he truly is! 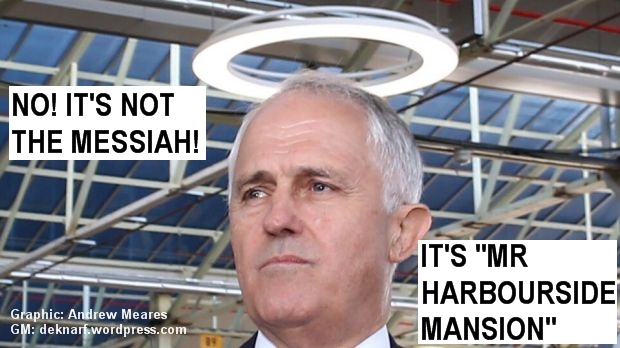 On the same matter the Bloody Rat was highly amused when Tony the Wacko Warringh Wabbott Abbott gave fulsome praise to the journalistic skills of Peta Spoonfeeda Credlin, his once personal assistant, who, strangely, seems to be continuing that assistance in a most helpful way. 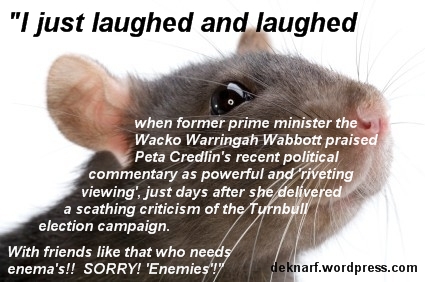 And Rat had a cheeky word or two of warning for Labor given the kind offer by the Greens to help them govern the country should there not be a clear winner on July 2. 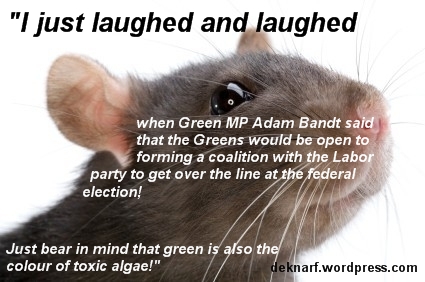 And before Rat could get in another word he was overwhelmed by a surfeit of toadiness which, we can be fairly certain, will continue right up to election day as these little beasties run rampant. The ABC’s FactCheck was given the old heave ho! 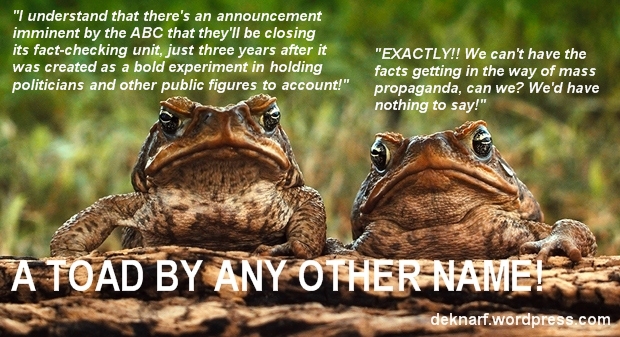 The Lieberals Green Army bright idea turned out to be a bit short on wattage. Still, it did manage to have some benefit! 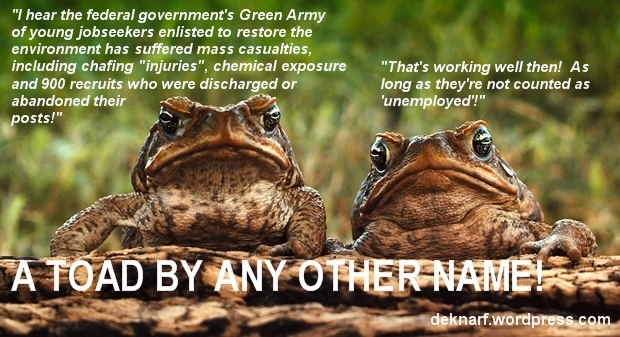 The Tax Office released some data on negative gearing that could have been rather embarrassing, but thankfully ABC FactCheck wasn’t around to, ummm, fact check! 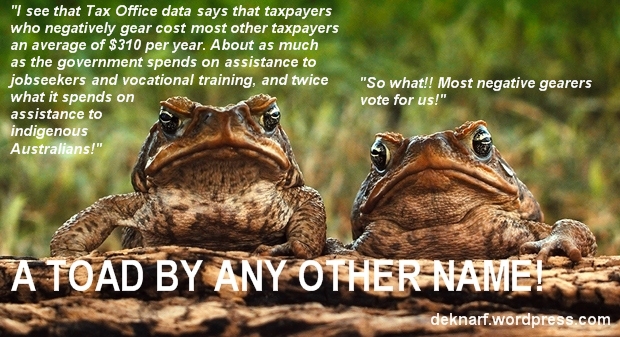 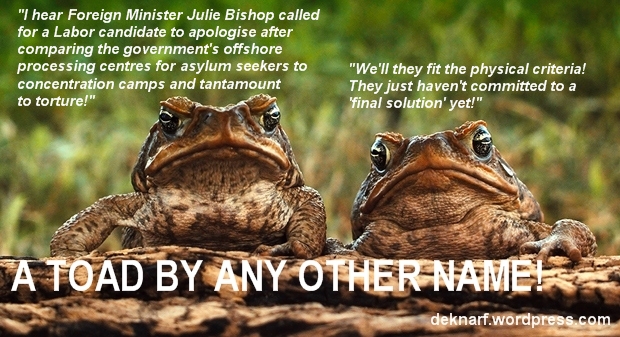 Julie also wasn’t backward in coming forward to support Immigration Minister Peter Dutton in his views on refugees. Her prior expertise in dealing with others less fortunate goes before her! 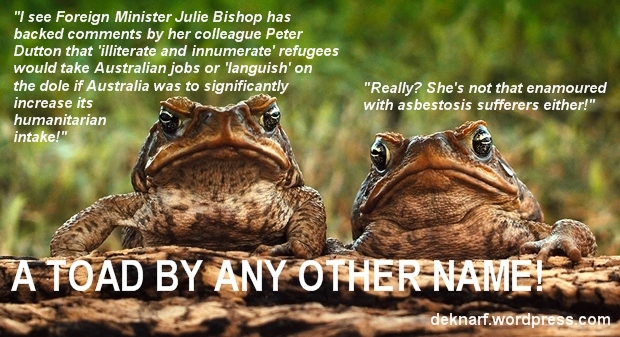 Given that this country was built by immigrants and refugees and is, reputedly, the most multicultural country in the world I’d like to thank such grubs for insulting most Australians, including me, and my forebears. And thanks to Malcolm Fraudbull also for not having the courage to stand up and speak out against such xenophobic dog-whistling stupidity!  You’re a pathetic shadow of your former self Malcolm!!  Or perhaps what we now see is the real you?

AFTER-AFTERTHOUGHT: This Lieberal/Neutered Puppy Coalition Government is trashing the good standing of Australia. It cares little about its people in its fanatical pursuit of ultra-conservative ideology. It is using the weapons of minority xenophobia, the secret fears and uncertainty of the general public and blatant propaganda, aided by a complaisant media, to turn this country into something is has never been – bigoted, racist, xenophobic, selfish, self-indulgent, self-obsessed, uncaring and a disgrace to all those things that have made Australia a great country! Tolerance, mateship, community, fairness and equity, honesty and a love of freedom in both speech and expression!

Australian born and bred who has spent most of his working life in R&D and IP management with earlier forays in the newspaper industry and martial arts. Fortunate enough to be living in one of the best countries in the World, even though I might get grumpy with it from time to time.
View all posts by deknarf →
This entry was posted in Uncategorized and tagged Adam Bandt, Australia, Australian politics, current-events, graphical manipulations, Julie Bishop, Malcolm Turnbull, Peta Credlin, Peter Dutton, satire, Tony Abbott. Bookmark the permalink.
Ærchies Archive - Digital Detritus